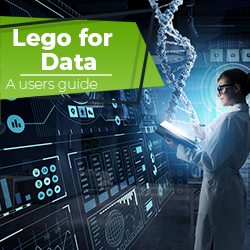 My first introduction to the world of Excel, or as I like to call it, ‘Lego For Data’ was back when I was a sole trader, before switching to working in small business IT…

The person I used for my IT then had installed Office 95 on my Windows 95 PC. In addition to designing the business’s website so that we could trade on-line he also built a fully functioning stock system working off the back of Sage accounting software.

This he built in Excel using Excel Macros before the VBA editor became available. I started out in business in the 70’s selling Science Fiction Books and Comics and what I saw in that first Excel stock system was a game changing moment in terms of the future of business and data handling. A moment that eventually led to me switching my work path to work with Excel. Like so many Excel enthusiasts I had been bitten by the automation bug

When it came to business and marketing in particular word processing and DTP were massive breakthroughs in efficiency. In times past I used to publish a comic and I used to spend 2 weeks working 16 hours a day doing my own reprographics to get each issue to press. Now I could do the  whole thing in a couple of days within normal working hours.

The breakthrough that I immediately saw in Excel that excited me so much was its potential for Data Processing and Reporting. 100% bespoke to both the business and the task in hand. Here was a tool where a business could really steal a march on the competition while making your day considerably easier at the same time.. When friends and associates asked me “why I was so excited?” by Excel I at first hesitated then thought of my favourite building toy as a kid and replied……”because it is like Lego for data”.

I said it then and I say it now “Excel is Lego for Data” and the reason that I am an Excel Developer is because I get to play with Lego every day!

What I mean by this is that all the different bricks are the equivalent of Excel’s functions and formulas for building custom workbooks and worksheets. The you have VBA and Excel macros that can be compared to the added functionality of Lego Technic.

With Excel as Lego bricks the limit to what you can build is pretty much your imagination such as the model of the digger above. However with the real world digger all it is good for is the purpose that it was built for. To be fair though sometimes that is exactly what you need.